In this example, we’ll create a simple dashboard element that displays some fake random data mimicking data from the UK’s power generation network.

To build this widget, we’re going to use a 3rd party JavaScript charting library morris.js – which is simple, quite powerful, but very easy to use. It has several charts including excellent line and area charts. For this example we’ll use a donut chart since it’s not available in the Node-RED dashboard widget set.

Apart from setting up the fake data, and drawing the donut chart, two key aspects of this tutorial which are generic issues and will be needed whatever external libraries you use are:

We’ll create a very simple flow for this example consisting of a timer to trigger action every 10 seconds, a function node to generate the fake data and the template node to display the data.

The timestamp node can be configured to fire every 10 seconds. The function node (Generate fake Electricity data) is a simple as possible. It generates a random number and then uses that as a seed to calculate fake values for the different generation types, ie Gas,Wind, Coal, Oil and Nuclear.

The fake data is dropped into the output msg.payload and sent on to the template node.

The template node is a little more complex than previous examples because we are pulling in an external charting library (morris.js) and it’s dependencies and we are writing some JavaScript code to use the incoming data (from the function node) to draw the donut chart.

The first part of the template node is fairly standard and uses script tags to define the src for the JavaScript libraries that we will be using. These are hosted on cloudflare.com or googleapis.com (they can be hosted anywhere – although if you are using FRED, you can’t store them locally).

After the libraries are referenced, we define a <div> (line 10) that is the element that the chart library will use and a simple header for the chart (line 14).

The actual javscript starts at the <script> tag at line 18 and is shown below. 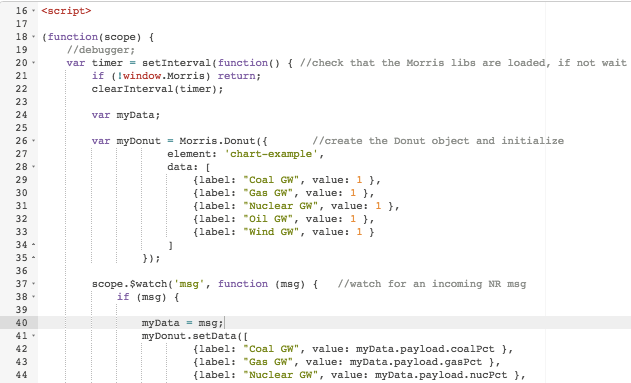 There are 3 main pieces of this code -checking that the external libraries are loaded (line 20-22), the creation of the Morris.Donut object and its initialization (lines 26-35), watching for new Node-RED messages and updating the chart (lines 37-49). All of this is wrapped in a function that accesses the Angular scope for this DOM object.

Lines 20-22 use a setInterval function to set up a simple repeating function that firstly checks that the external libraries are loaded. It does this by checking to see if the Morris object exists (line 21). If not the function returns and exits at line 50 where we wait (100 ms) before trying again. This simple code pattern is critical and is required whenever you use external libraries in the template node. This is because Angular is async and will happily tell the browser to start loading external libraries and then get on with running your code without waiting for them to finish loading. If the libraries aren’t loaded, the first time you try and use them you’ll get an undefined error.

Create the morris.js donut chart element and initialize it

It’s beyond the scope of this tutorial to explain the details of the morris.js library. You can check out an example we’ve written previously or the many examples available online, eg here or  donut example

However, as can be seen, line 26 creates a new instance of the Morris.Donut object. Creation requires a minimum of an element (the HTML element that will be used for displaying the donut chart) and an array of data to display structured as <label:labelname><value:actualvalue>. We create a dummy array with all values set to 1.

Again, the details of how Angular works is beyond this simple tutorial. A good overview is available on the Angular docs page. Briefly, Angular implements a Model-View-Controller (MVC) in which the model (the data) is separate from the view (the DOM). Controllers (code), Expressions and Directives manipulate the data which dynamically updates the view (the Dom) so you see the changes. The model is managed in a structure referred to as the scope.

So coming back to our example, the code at line 37 tells the template node to look at the scope (all our data) and watch for changes to the variable msg. When msg changes, in this case because a new Node-RED message has arrived, the function then executes (lines 38-48) and simply extracts the new data from the msg.payload and uses it to call the setData() function on the Morris.Donut object (myDonut) which dynamically updates the donut chart.

All of the above is wrapped in a function (lines 18-51) which passes the scope so that it can be accessed using the watch method.

Once you setup the flow, you’ll be able see the new UI element on your dashboard and as the flow triggers a new message the donut chart will update.

We’ve chosen to use a simple external charting library for this example, Morris.js – which is quite simple. However the techniques used here are the same for all external libraries so feel free to replace Morris.js with any of the many other charting libraries out there.