For each node, you’ll see a brief overview of its functionality and an indication of which example in this lecture series uses the node, so you can look in more detail at how to work with the node. This lecture is mostly a reference section. However, it is worth looking quickly through the nodes, so that you have an idea of the basic functionality available to you as you begin to craft your own flows.

When you install Node-RED for yourself on a device such as a Raspberry Pi or Beagleboard, it starts up with a default set of nodes. There are 8 main categories of nodes in the default install: inputs, outputs, functions, social, storage, analysis, advanced and Raspberry Pi (See Figs 4.1 and 4.2) Let’s take a look at each category in turn. 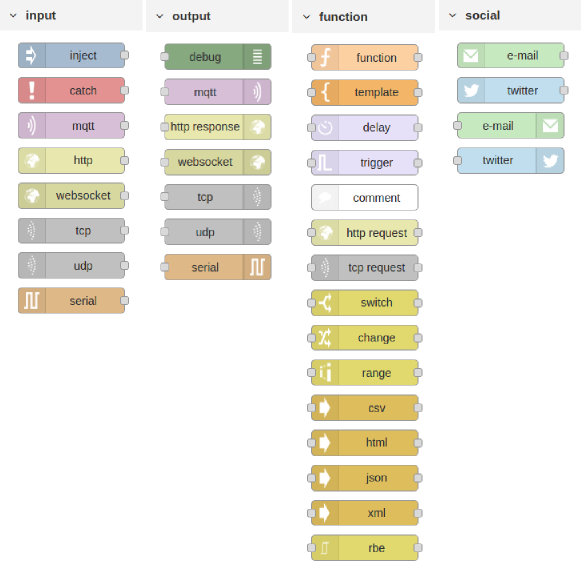 There are 7 basic input nodes installed by default. They cover the basic communications mechanisms that IoT applications are likely to use. Ranging from lower-level internet protocols such as UDP and TCP through to the higher-level HTTP and the publish/subscribe MQTT.

The output nodes are essentially the mirror images of the basic set of input nodes and provide a way to send data on the same set of protocols, i.e. mqtt, http, udp etc.

The function category contains a variety of nodes that carry out specific processing functions. These range from the simple delay and switch nodes to the programmable function node that can be adapted to almost any programming need.

The default node set for storage, because it is targeted at devices such as the Raspberry Pi are quite limited and focus on file based storage.

You should note that FRED, because it’s a cloud service, doesn’t support the basic file nodes. Instead it replaces these with a variety of storage nodes ranging from Mongo to Dropbox. However, for completeness the default nodes are covered here, so that you can use them, if you install Node-RED yourself (see lecture 7).

A set of miscellaneous nodes offering various types of functionality.

The FRED service adds a number of nodes to the standard default set. These new nodes, which have either been written for FRED or collected from the public repository, have been added, as they offer useful functionality that expands the capabilities of the vanilla node set.

Note: these nodes are available in FRED by installing them using the FRED installation panel. For a quick example of how to install nodes check out this tutorial.

As you will see, the majority of these additional nodes focus on services and capabilities that match well with FRED’s nature, i.e. a cloud-based service. In many cases they focus on using Node-RED for web based integration or to access enterprise level services. 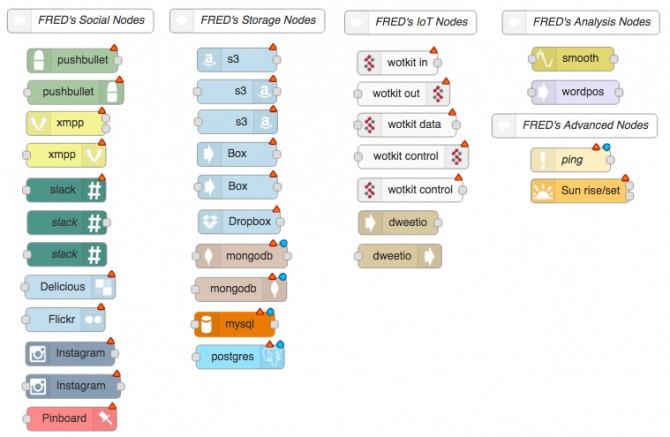 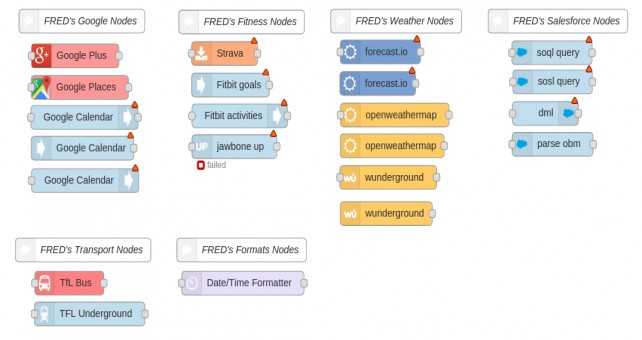 The FRED platform only adds a limited number of analysis nodes as the default set is quite extensive.

The following nodes are available in FRED and don’t fit into the basic categories that vanilla Node-RED provides. These include nodes to access and control Google services, enterprise nodes such as Salesforce access, nodes for accessing transportation API (e.g. Transport for London) and other miscellaneous nodes for access to weather services, etc. 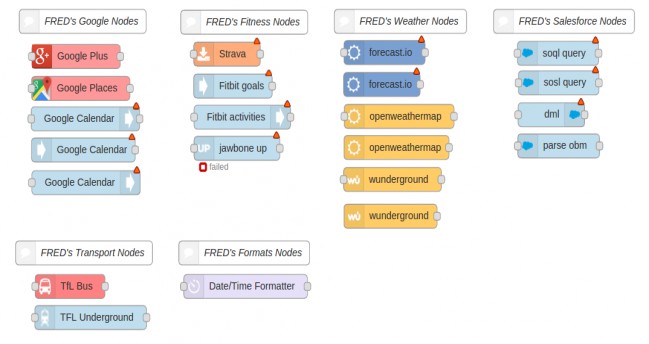 FRED supports several Google nodes to interact with a range of Google services.

FRED adds a set of nodes to give access to a variety of weather services.

A set of experimental SalesForce nodes are available with FRED.

In this lecture, you were presented with a summary of the default Node-RED nodes available on installation, and the extended set of nodes that FRED adds. As you have seen, there is a wide variety of nodes allowing you to build complex flows with little or no programming.

You’ve also seen that not all nodes are always available, for example the Raspberry Pi nodes don’t work unless you are actually running Node-RED on a Pi. So it always pays to check that you can run the nodes you need in your environment.

However, given the large number of nodes available, and the fact that the community is creating new nodes on a daily basis, you are likely to be able to find a node that meets your needs. If not, you can fall back on the flexible function node, or even create your own, something that will be discussed in the advanced lectures.