This tutorial will show you how to make use of an SQLite database using the litedb node on the FRED hosted Node-RED platform to create database tables and store data. Under the hood, the litedb node uses SQLite.  As a very lightweight relational database, SQLite does not need complex setup procedures, making it an ideal database management system to use for embedded systems and rapid prototyping.

The tutorial will cover the basics of:

For the tutorial, we’ll be using the FRED cloud based Node-RED service (You can install the litedb node on your own machine if you prefer). Because FRED is a shared service, the litedb node limits your use of SQLite in a couple of ways:

Keep in mind that, although there is a limit of 4mb, you are still able to create as many tables as you want up to the size limit. With the sample table that we created for this tutorial, the 4mb database file is able to hold approximately 140,000 records.  For more information on SQLite see More documentation can be found on https://sqlite.org/.

Sample flows for this tutorial is also available in here: SQLite with litedb node on FRED

What is Node RED?

Node-RED is a visual tool for wiring the Internet of Things developed by IBM Emerging Technology and the open source community. Using Node-RED, developers wire up input, output and processing nodes to create flows to process data, control things, or send alerts. It works by allowing you to wire up web services or custom “nodes” to each other, or to things, to do things like: 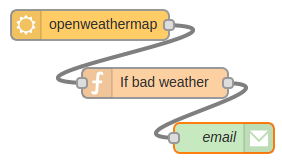 If you’re new to Node RED you might find our Introduction to Node RED tutorial very helpful.

The Front End for Node-RED (FRED) manages instances of Node-RED for multiple users in the cloud. We manage and optimize your instance of Node RED so you worry about accomplishing your project, not setting up and maintaining your Node-RED instance.

About Sense Tecnic: Sense Tecnic Systems Inc have been building IoT applications and services since 2010. We provide FRED, cloud hosted Node-RED as a service to the community. We also offer a commercial version to our customers, as well as professional services. Learn more.

To get started, create your own Node-RED instance in the cloud. Register for a free account at http://fred.sensetecnic.com.

First, you will need to ensure that you have installed the litedb node since it is not installed by default in FRED. After you register for FRED, or after you login, you will be presented with the FRED dashboard.

In the management panel, click “Add or Remove Nodes“, and find the litedb node. 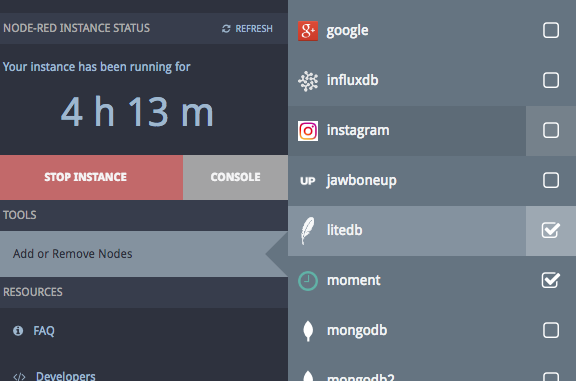 Make sure the litedb node is installed for your instance. If the box beside ‘litedb’ is empty in your Nodes list, just simply check the box and restart your instance.

Make sure you start your instance by hitting the start button.  If it is already started, stop, and start it to ensure the new litedb node is available.  Create a new tab to start with an empty canvas.

For demo purposes, we are going to create a table and inject random numbers at a constant time interval. We will also look at how to view and manage this data later on.

As documented on the info tab of litedb, the node takes in SQL queries in the input msg.topic, and then returns responses in the output msg.payload. To create a table to store some data, all we need to do is send the appropriate SQL command to the litedb node. A simple way to do that is to connect an inject node to the litedb node with the following settings: 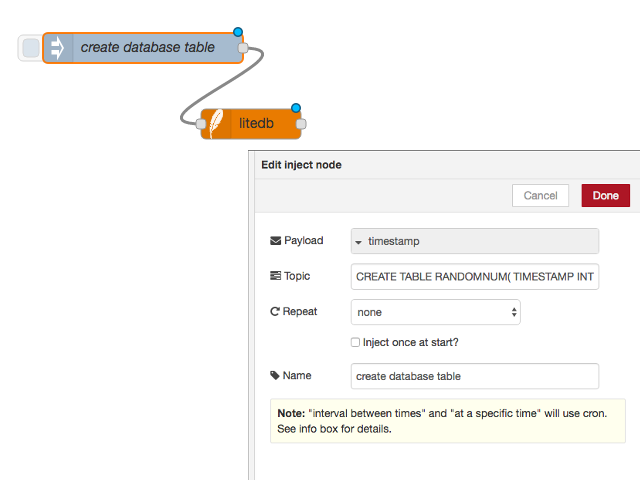 where in the topic field, we have the query

As you can see, this demo table is called “RANDOMNUM“, and it has three columns, TIMESTAMP( Primary key column ), VALUE, and BOOL. (We will use BOOL to store an attribute which indicates if the number is larger than 50 or not) These three columns are all set to NOT NULL and with type INT.

Once you are done, connect a debug node to the litedb node, and deploy the current settings. Hit the inject button, and you should see that RANDOMNUM is created. 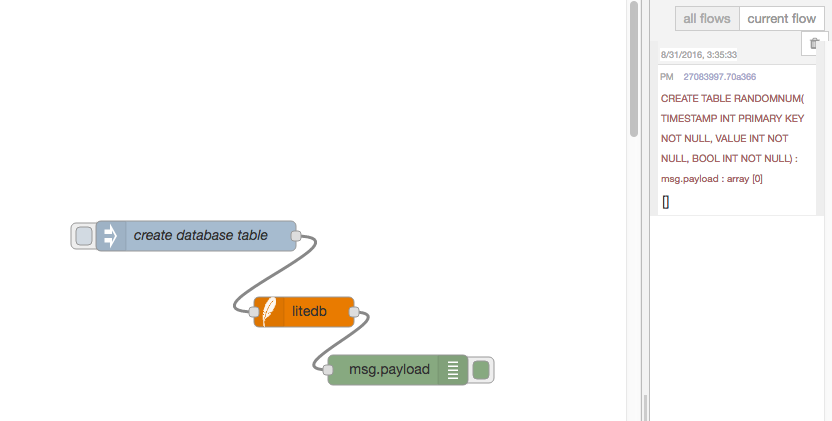 We can use the same method to send an SQLite query to the database to inject a new value into the table.

Let’s set up another inject node that injects a new timestamp every 15 seconds simulating a sensor event. Followed by a function node, we will write a query with the input of the timestamp, and send the insertion query to the litedb node.

First, drag a new inject node, and add these settings.

then, let’s connect this timestamp node to a function node. 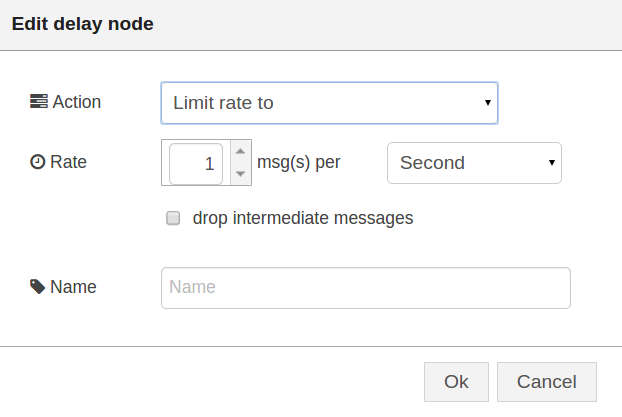 In the above code, a new record is inserted into RANDOMNUM with a timestamp as its primary key, a randomly generated value (ranged from 0 to 100), and a boolean value as if the number is larger than 50. Notice that there is no actual boolean data type in SQLite, so we represented boolean as either 0 or 1.

Then, we can just connect the function node to the litedb node as follow. Once you hit deploy, the inject node will start inserting new records to the table.

To see the records from our table, we can set up another new inject node, with this in the settings: 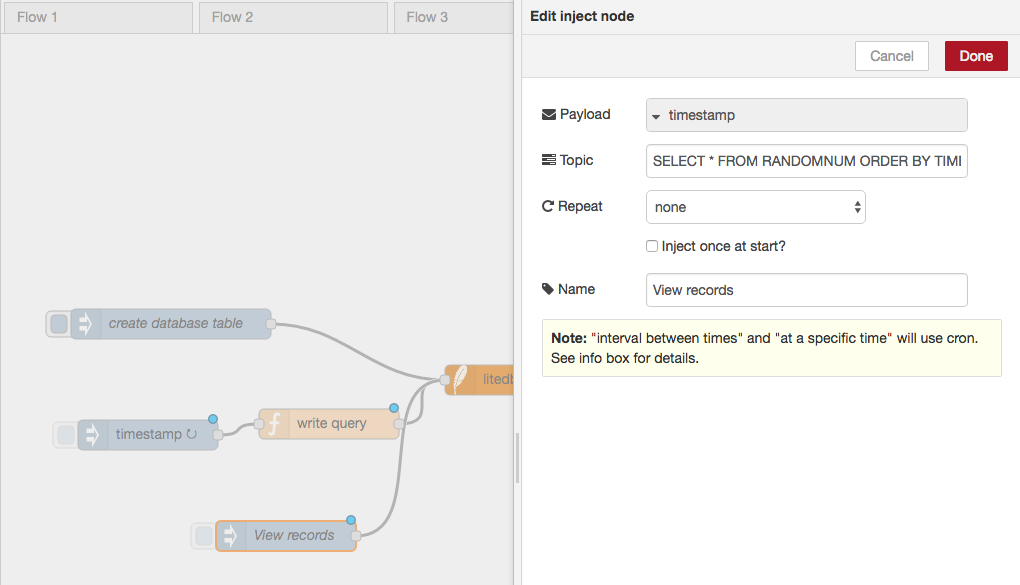 where the Topic field is

As you can see, we are showing the first 100 records in table RANDOMNUM ordered by the TIMESTAMP column in descending order.

After you deploy the nodes, and inject the SELECT query command, you should see something like this as the output of the debug node:

Controlling the size of your database

If you follow this guide, you will notice how we set up an inject node that injects records in 15s intervals. In real world scenarios, the database grows in size and may eventually affect the performance of servers. In addition, and as mentioned above, the litedb node has a limit of 4Mb in size. Here we will show you an example of how to delete older records that you do not want to keep.

We will set up another new inject node, and call it ‘delete’. For this example, it will run the  delete query every minute, to remove the data that is older than 1 hour.

where the query in Topic field is

Notice that, the timestamp generated from the inject node is UNIX epoch time in milliseconds, but the default timestamp return from the SQLite function strftime() is in seconds. That’s why we need to multiply 1000 at the end.

As you can see here, we use a modifier, ‘-1 hours’, to specify the time interval of data that we want to keep. In our case, this inject query means that we want to clean data that is one hour old every minute. We choose 1 hour in this case just for demo purpose. You can use different modifiers to suit your application, more info on the function strftime() and the modifiers can be found in: https://www.sqlite.org/lang_datefunc.html

While you are trying this deletion node, you can also set up an inject node to count the size of the table with this query

Don’t forget to connect the inject nodes to the litedb node in order to send the query command into SQLite!

Now sit back and see how the node clears out the old data for you in the debug tab.

From the previous exercises, we know that when we send

into the litedb node, it returns an array of records in the response, we can simply use the ui template node to parse the information we want.

For example, we would like to have a table showing the first 20 records, just simply connect the template UI node to the litedb node:

in the template node, enter the following code:

and it looks like this in the config tab: 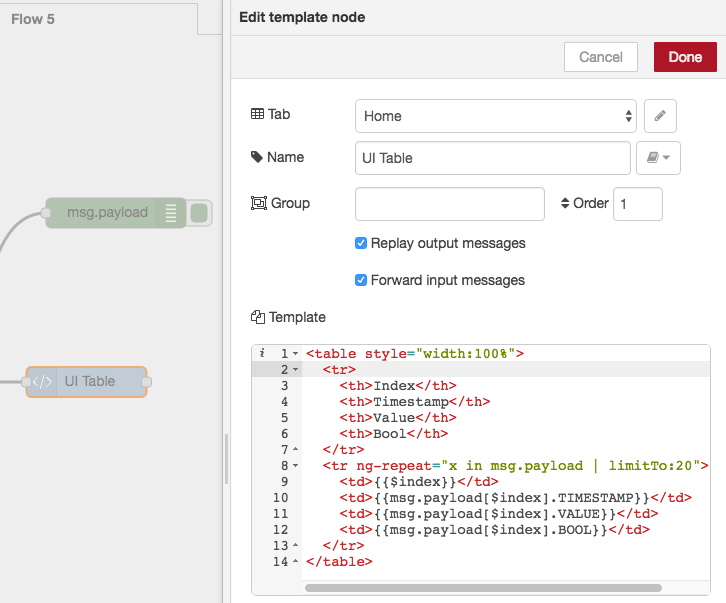 This code simply generates a table in HTML, and places the index, TIMESTAMP, VALUE and BOOL fields from  msg.payload into the appropriate cells of the table. It then repeats for the next 19 records (using ng-repeat & limitTo). You can set up the table however you like. Once you deploy the nodes, the UI template node will update the table whenever SELECT * is sent to the litedb node, and an array of records are returned from the litedb node to the UI template node. The resulting table would look like this when you hit the URL https://{REPLACE-WITH-YOUR-USERNAME}.fred.sensetecnic.com/api/ui: 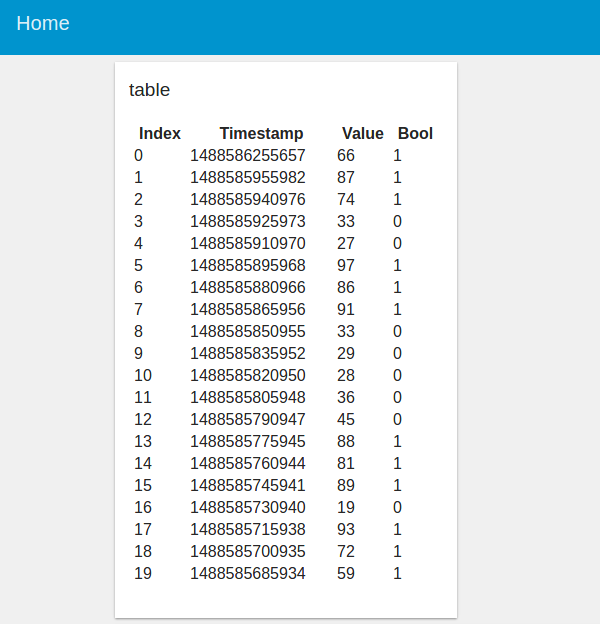 This covers basic usage of the litedb node. Although the example in this guide just stores random generated numbers into the database, you can grab data from any data source and insert it into the database, and query it any way you like. For more information on specific SQLite queries, see https://www.sqlite.org/lang.html